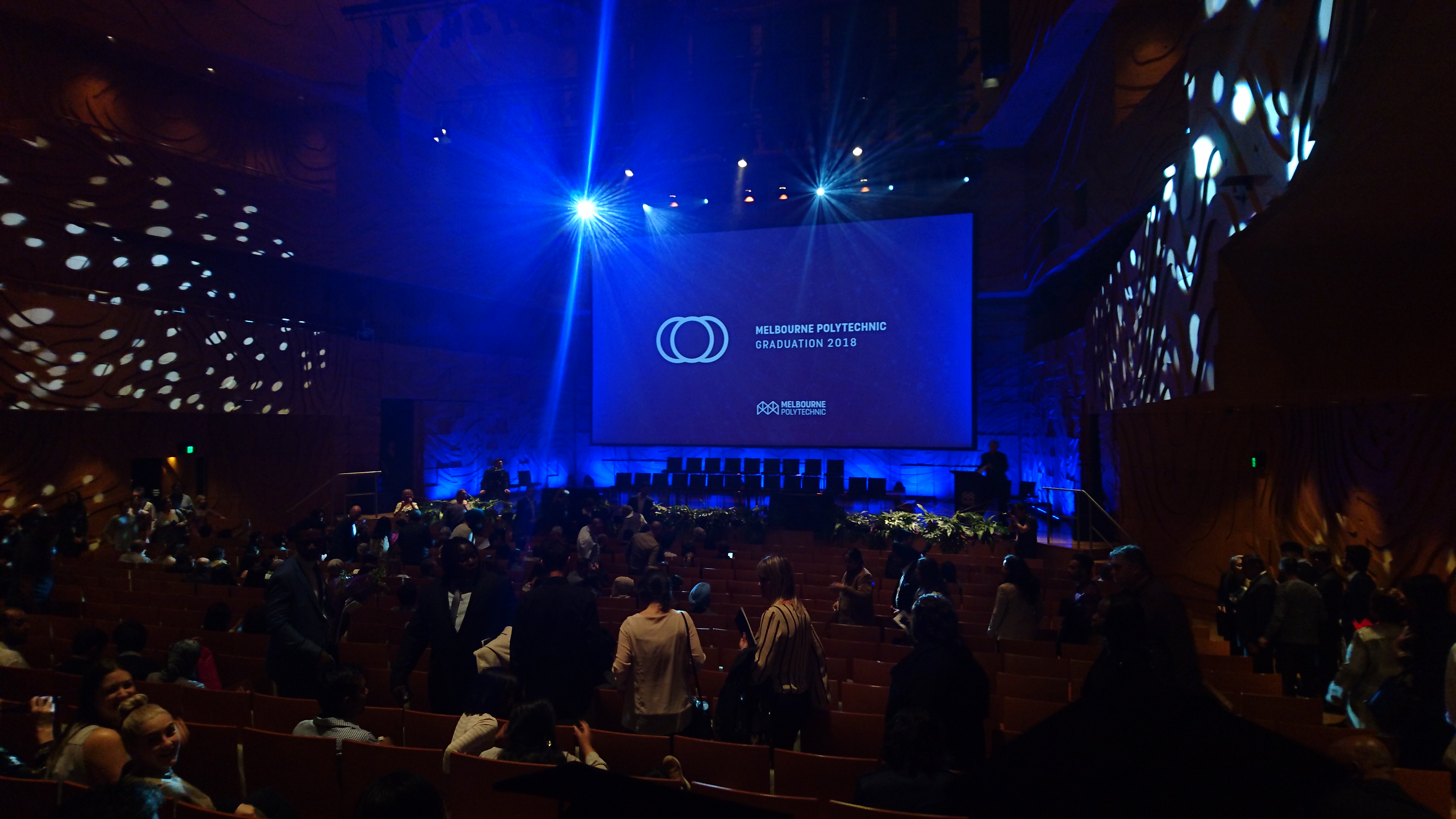 What a fantastic night!

There aren’t a lot of words to describe the feeling on Thursday night on the way home. The best I could summarise it as on Instagram was honoured. Not only to have been nominated and awarded the school of Engineering, Design and Construction’s Vocational Student of the Year, but to also have received the overall Melbourne Polytechnic Vocational Student of the Year. There was a great field of school winners in both Vocational and Higher Education, and my congratulations goes out to all of them. The interviews we saw on the second night all highlighted their efforts that earned them their awards and I look forward to seeing the video interviews of the other recipients soon.

In the end there were only three of us from the Advanced Diploma at the graduation. Andreana, Lauren and myself. Callum from our group in 2016 was also there to graduate from the Diploma, and my long time friend Georgina from my University days was also graduating from her Advanced Diploma in Building Design. In the end Andreana and I both had the same thought that we knew more staff than students at the event with the work we do within the institute.

The night wasn’t without its hiccups. We’d been instructed on the procedure during the rehearsal for receiving our graduation letters (in our case we got letters as we’d already received our certificates in the mail). There was a bit of a slow burn getting into the rhythm of the process before it became a smooth flow, at one point it actually went the opposite way and resulted in a backlog of graduands waiting to cross the stage. A bit of an error, but nothing that couldn’t be resolved with a moment of respite to allow them to flow through before continuing.

There was a mistake with the Student of the Year awards. Though I admit it was one that wasn’t really picked up on fully at first. When I received the school award (the non-overall one) I remember looking at it thinking that it probably should have listed the school somewhere on the award as it only had “Outstanding Student of the Year”. Uh-oh. I thought to myself. Was this a mistake?. When the announcement was made for the overall vocational student of the year I handed the first award to Lauren and made my way to the stage to collect the award and that was the one that had Engineering, Design and Construction written on it. Lauren even asked me when I got back to my seat what the second award had written on it as her and Andreana had also picked up on the wording. So while I didn’t know for certain I had a strong feeling the mistake had been made. But that didn’t make the overall announcement any less nerve racking as my heart rate reading from my fitbit will tell you… 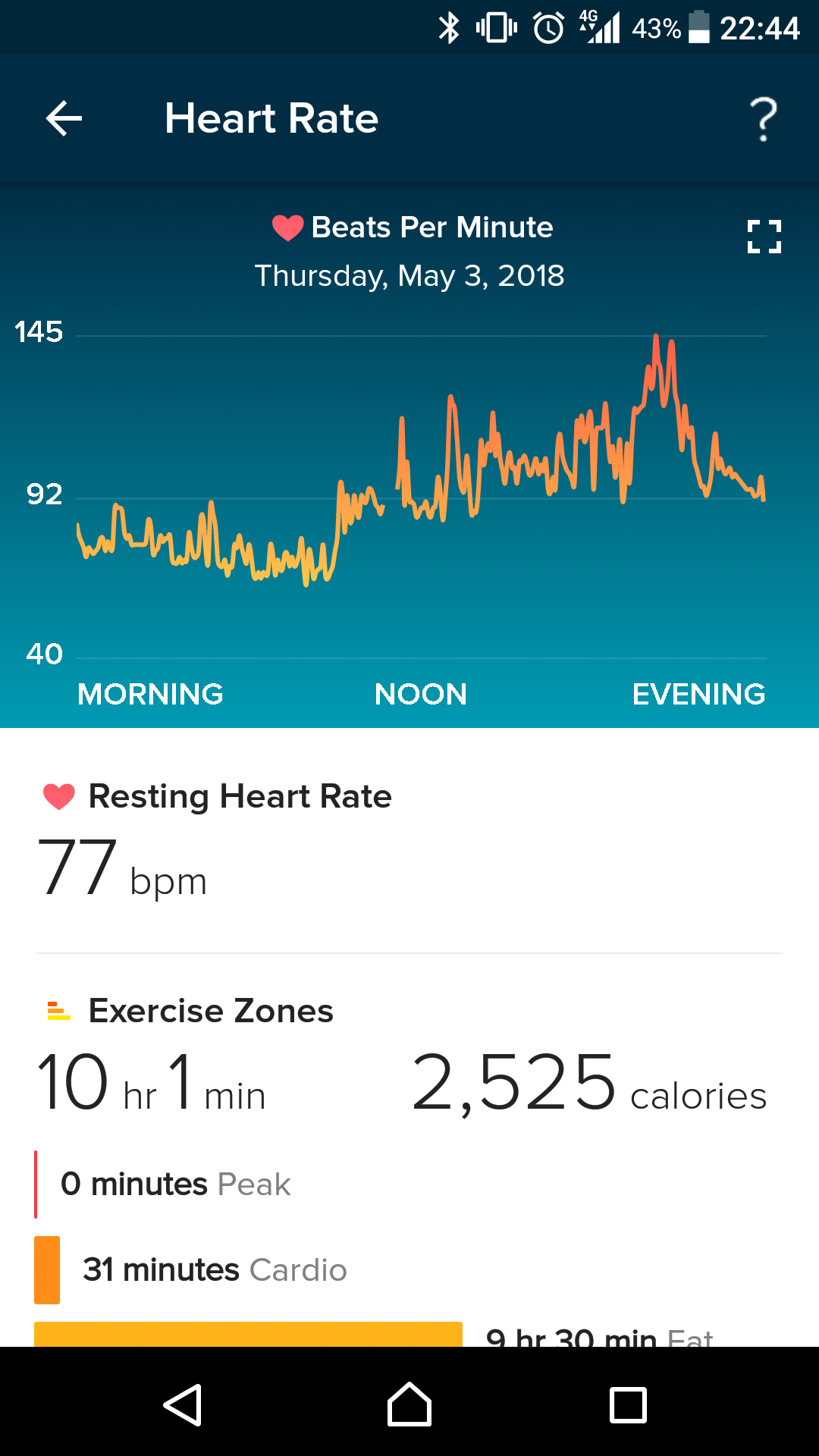 Other than that though the event went well, it was well organised (as I knew it would be having spent the last month and a bit working with the Marketing team who were organising it even though they wouldn’t tell me anything because I was graduating) and though it started a bit later than planned the only other major fault was venue based. As the caterers seemed unaware of the contents of the food (nuts, gluten, and the like) and didn’t have a lot of variation.

At the end of the night I attempted to find as many of the other award winners as possible to congratulate them all, there was a lot of people around so it was very difficult to find everyone. I caught up with Georgina after the ceremony, Mark and Chiara (G’s sister) had been sitting with mum and dad so finding them was relatively easy. Frank and Joanna (who initially nominated me for the school of EDC award) also found us in the crowd. I believe we were just outside where they were gowned so it probably wasn’t hard for them to find us. We made our way downstairs and had an offer for a couple of photos to be taken by Phil (another colleague who was taking photos for the institute of the whole event) with mum and dad in front of an MP banner and the CityWatch representative (the award sponsor for this year) congratulated me again. At that stage we started hearing an announcement that the venue was closing (though it wasn’t in the end and I would have liked to stay a bit longer) so we started making our way out, on our way mum was handed a bouquet of flowers by Frances Coppolillo (the CEO of the institute) who congratulated both her and dad. That was a special moment. 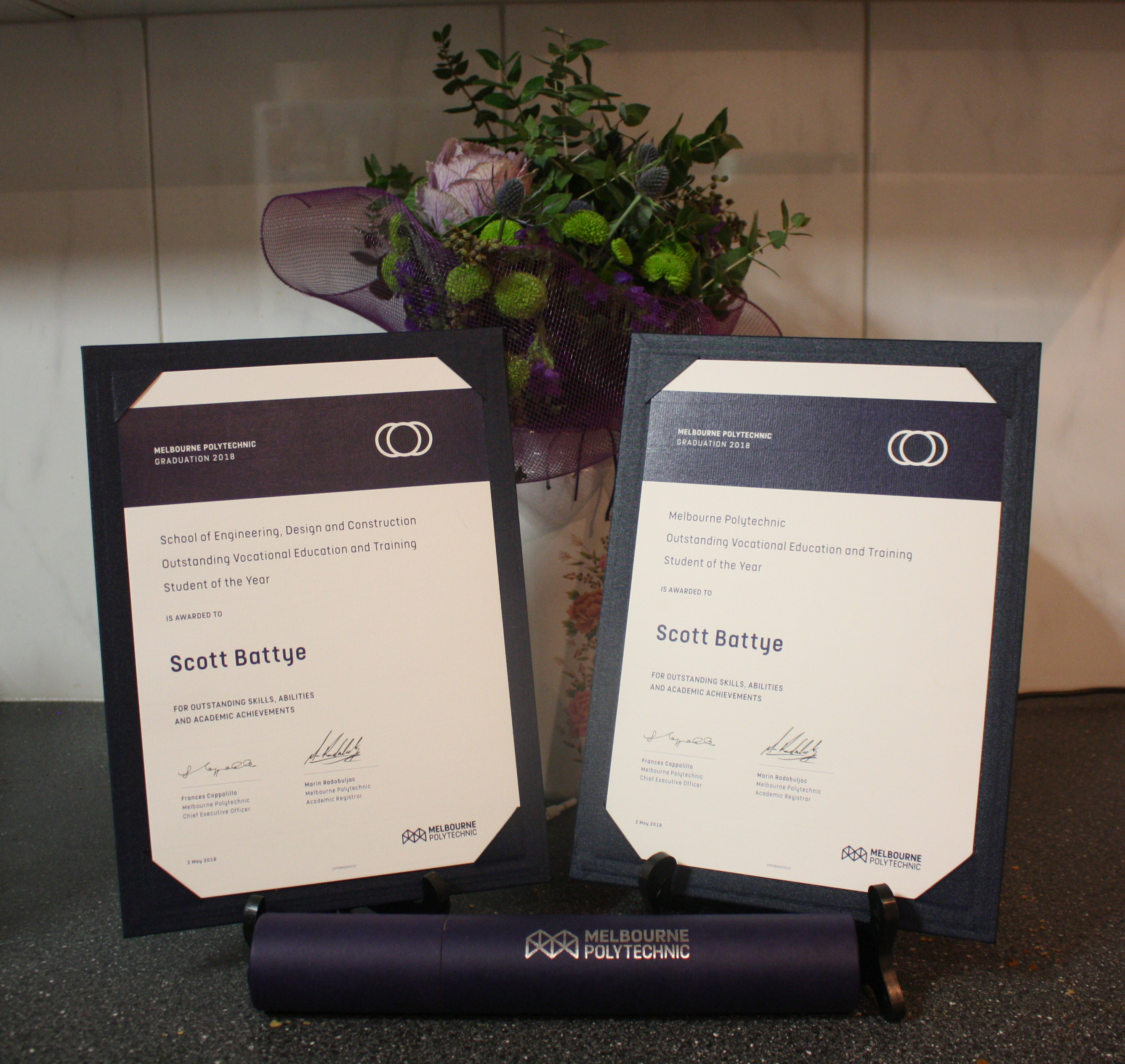 Days turned into weeks, weeks into months. I really let this stuff go didn’t I? Already falling behind on this thing so that New Years Resolution ain’t going well is it? Here’s an update on my 2018 so far…

I picked up some more work, I’m now working across two departments at Melbourne Polytechnic. One role as my existing ICT Service Management Officer role. The new role is a junior Website Administrator and Developer within the Marketing and Communications department. That’s going well, a lot to take in but I feel like I’m picking it up okay.

Because of the new job I had to move into night classes for the Training and Assessment. That’s going… okay. I guess. The delivery of the course isn’t something that really gels with me and the assignments are a real pain right now with how many there are and quickly they’re all due. Persevering with it though because I still feel like it’ll be good to have in the long run.

That did mean I had to give up Tuesday Night Trivia. I have managed to get a night in with my Marketing crew on a Wednesday which was good but I’m missing the regular crew.

I’ve decided already that I’m not particularly happy with this website layout overall. I’m liking the colour scheme and the overall idea of it but the execution I feel could be a little better. I’ll revisit it when I’ve got some time.

The car hunt is proceeding. At this stage I’m banking on around late May to early June purchase window, hoping to get in on that EoFY sale action. At this stage I’m targeting a 3-5 year old Mazda 3, Maxx or SP25 depending on the price I can get (I’d rather the SP25 if I can get one for a good price, mainly for the 2.5L engine). My only other option would be a damn good price on one of the newer Civics, but they’re still pretty new so the prices aren’t coming down at this stage looking at comparison models (The VTi-L especially is around 5-6k more than an SP25), my only drawback on that is that they have CVT though, but if the plan is to eventually have everyone driving electric cars then it’s something we all have to get used to.

Anyway I think that’s enough for now. I’ll be back with another post at some point. I am cooking one up that I’ve had in mind for a little while so we’ll see how that goes.

Excerpt from Whittlesea Tech School – About Us:

“The vision for Whittlesea Tech School is to be a centre of technological innovation that builds the aspiration and confidence of students to engage in a future world of work, with the skills and capacities to successfully operate as global citizens.”

Located at Melbourne Polytechnic’s Epping Campus, the Whittlesea Tech School will connect education, industry and community with Science, Arts, Maths, Technology and Engineering, to drive innovation in Melbourne’s growth corridor in the North.

END_OF_DOCUMENT_TOKEN_TO_BE_REPLACED

Excerpt from Banyule-Nillumbik Tech School – About Us:

“The vision for the Banyule- Nillumbik Tech School is that it is an innovation hub that sparks creativity and imagination through technology, local community and global connections”

END_OF_DOCUMENT_TOKEN_TO_BE_REPLACED 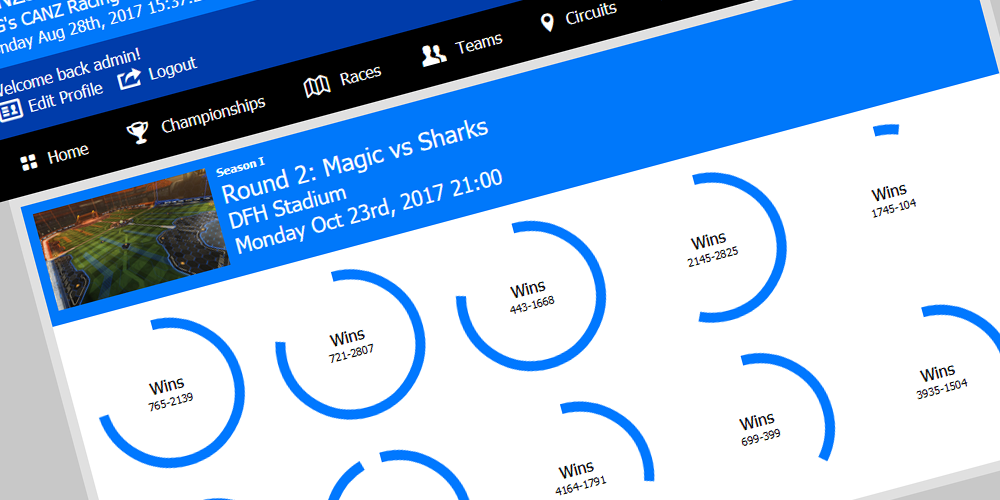 END_OF_DOCUMENT_TOKEN_TO_BE_REPLACED

Alright, I need to write another one of these things to get something else up on this blog since it’s been almost (or is it over?) a fortnight since I last updated it. So let’s goooooooo!It’s been a relatively low-key couple of weeks so I’m not sure I’ll have much to talk about on an update level. I’ve got another post I’m working on but that could take a bit of time to put together…

Anyway this online course I’ve been doing has been going well. Python is, like most programming languages, relatively straight forward at a base level once you understand the syntax. Now that I’m starting to get the hang of the differences between it and something like PHP or C# I feel like I’ll pickup most of the content in the course quite quickly. Of course that remains to be seen and with my plans for the year ahead I may not get a lot of time to look at it in the coming months.

That’s because I’ve signed up to complete my Certificate IV in Training and Assessment with the aim to get into doing a bit of teaching. Whether that’s at Melbourne Polytechnic or not remains to be seen but it still seems like a good thing to have going forward. I’m a little disappointed it’s a year long course though. For a Cert IV I was expecting a 6 month program. Anyway, I’m hoping there’s an avenue to accelerate at least some aspects of it to get it completed faster.

Our team started back at Trivia last Tuesday. It was actually quite busy the first week but on Tuesday it wasn’t too bad. We really need a sixth member of our team who knows their celebrities and social media though because we are absolutely shit at those questions. Also I’m really only good if the sports questions are about Cricket or F1, maybe a moderate amount of AFL, but I’ll probably luck into knowing the answer about most other sports.

Spent some time helping Layla move house, moved a fair few boxes and helped clean the old place up a bit, hope she doesn’t need to do that again in a hurry! The new place is much nicer than the previous one though, much better and more open layout which should be good for parties!

I think that’s all for now, I’ll be back with more in the coming days* 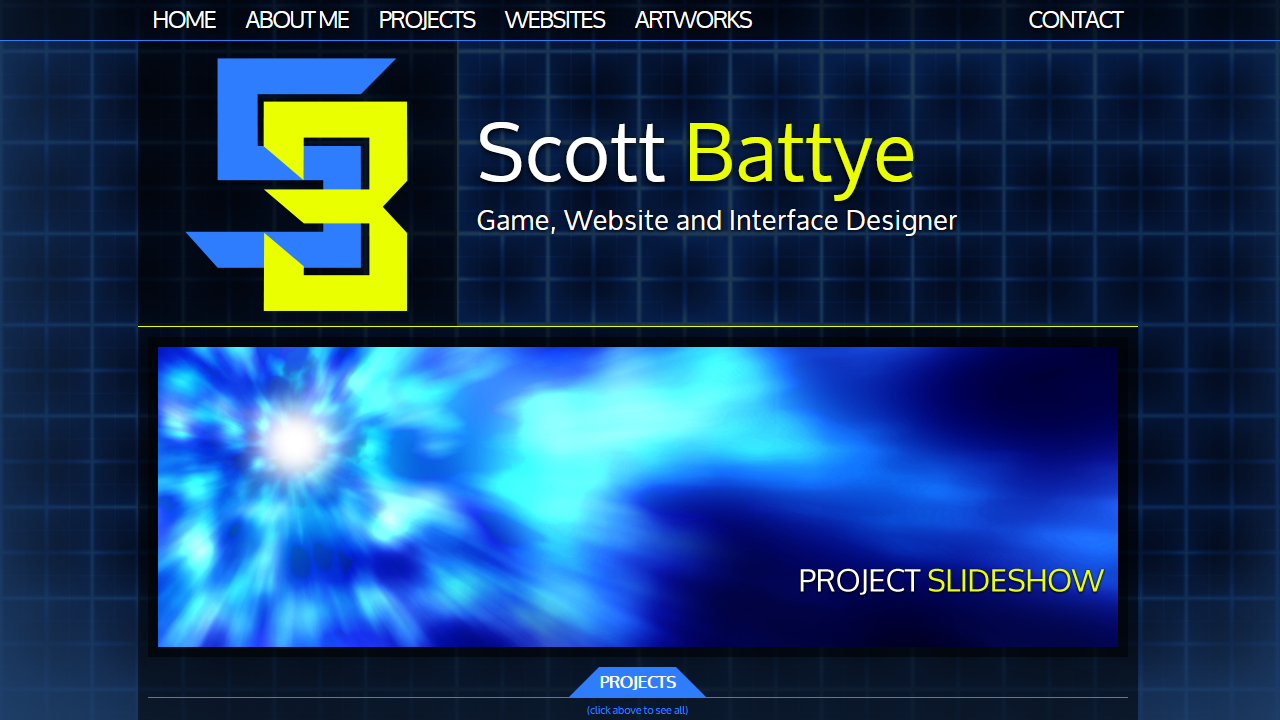 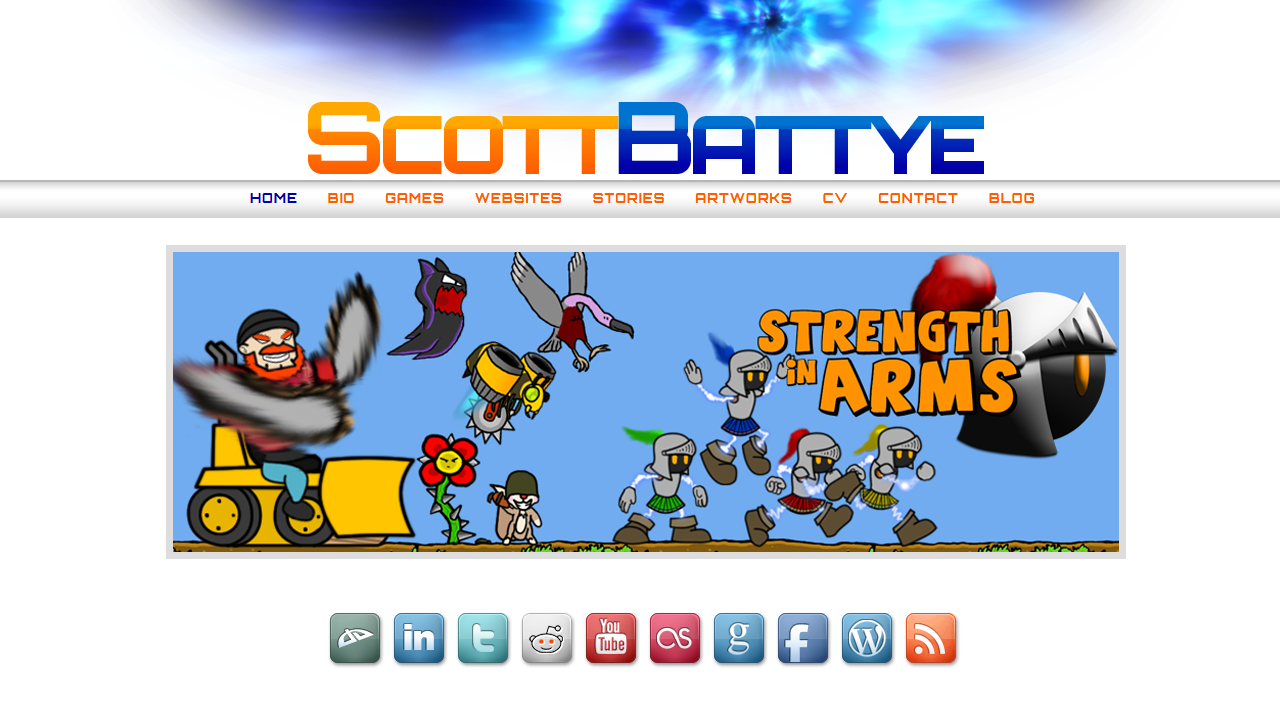 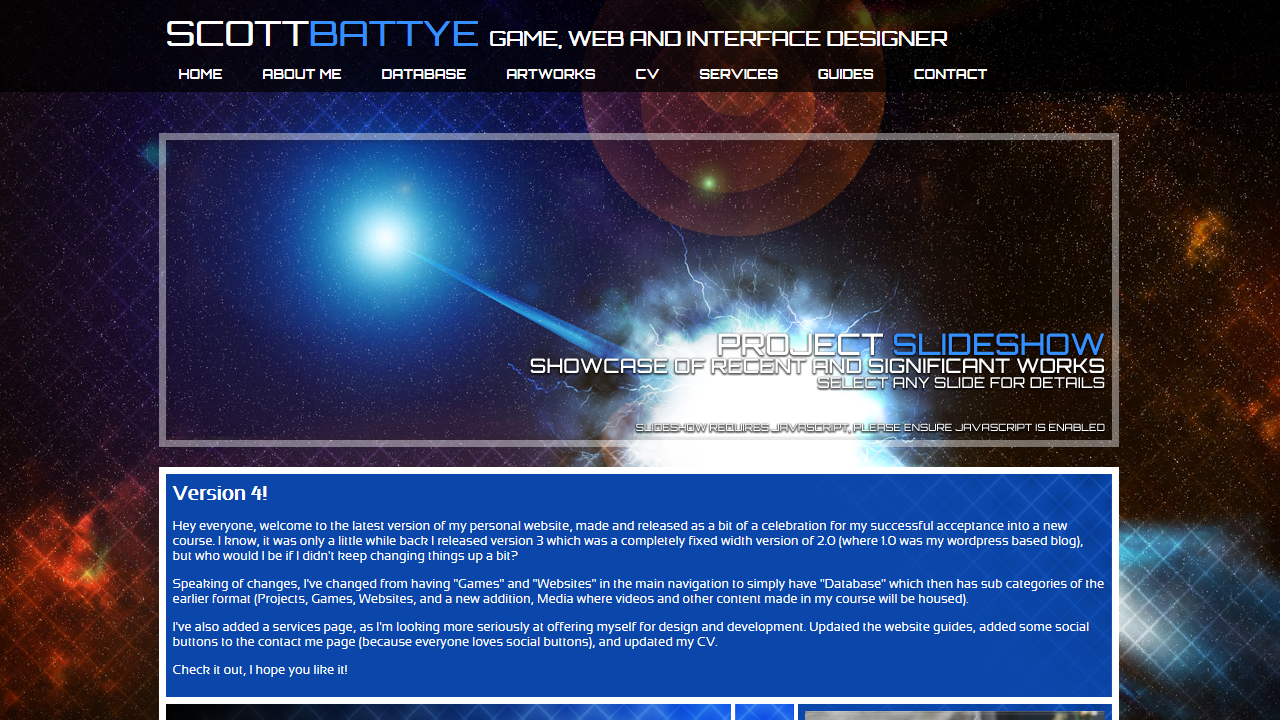 As a general rule I don’t set New Year resolutions so as to not be disappointed with myself when the end of the year rolls around and I haven’t achieved anything I set out to achieve at the start of the year. This year there is only one exception to that general rule.This blog.I aim to keep it updated fairly regularly and with a bit of luck I’ll be able to look back on the posts at the end of 2018 and work out what’s been coming out of my brain that people have actually been reading. Maybe it’ll be worth putting together a list as part of my reflections post at the end of year. Or maybe it’ll all be garbage and this year-long study will end with nothing but a bit of wasted time on my behalf.

Let’s look towards something else though. While I don’t do resolutions, I do have a checklist of things to do this year. So let’s have a look at some of those items and see in 12 months time how I’m tracking shall we?

There’s some other stuff on my list, but they’re things to talk about at another time.